The second update (and a significant one) after launch:

* Morguefile browser and reader: This is a new option in the main menu which reads all morguefiles (summaries of each and every character you've played) and lets you order them by date, XP and turns played. It also features a reader for it.

* More uniques: Added a new unique character (feral teenager) and fixed Cincalco so that there's more variety and some more uniques show up. Uniques are usually enemies (though they can be allies) that randomly show up. They aren't guaranteed to appear in every game.

* Clearer Zoom option highlight for high definition screens when you start a game or the tutorial.

* Atlatl message clarifying that you need to wield an atlatl spearthrower to throw atlatl spears when there's spears in the quiver but you have not equipped a spearthrower.

* Easier tutori
al: Your character is a little more powerful in the tutorial, so hopefully it doesn't take too long to kill the rats with spells and bow.

* "Game in progress" warning when you try to create a new game but you still haven't finished the previous one.

* Tutorial save bugfix: You could save the game in the tutorial through the bug sending mechanism and thus ruin your character progress. It was very rare since it makes no sense to play the tutorial while there's a real game in course, but still fixed.


Dawn of the Mexica has been released!


Dawn of the Mexica has been released on Steam!


Steam webpage is now online and a gameplay trailer has been released!

We've reached the final phase, the game is finished both in english and spanish, with barely a few details left to take care of. All in all, the intended release date is currently the 26th of November, this year 2020.

Watch the trailer at:
https://www.youtube.com/watch?v=kTBbzbRPvpc

Wishlist Dawn of the Mexica at:
https://store.steampowered.com/app/1456630/Dawn_of_the_Mexica/ 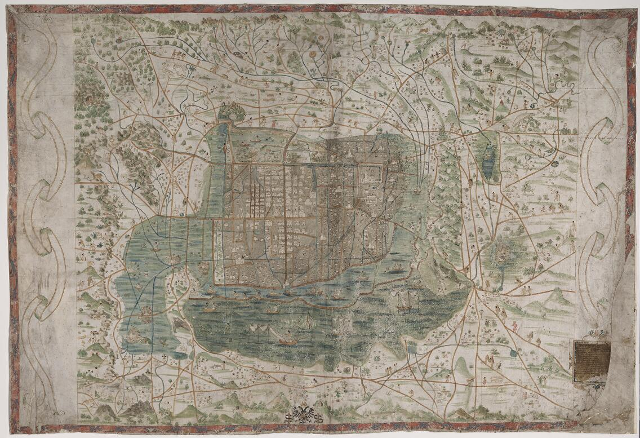 Content creation has come to a very advanced status; 18/20 levels have been completed and now it is time for the great city of Tenochtitlan. This might be the most difficult level to create, since it should combine both historical accuracy, roguelike random elements and an interesting layout for the player to enjoy.

The layout is based on the Uppsala Map from 1550, purportedly created by members from the Mexica nobility that were working under Francisco de Sahagún. Acknowledgement should also be given to Lily Díaz-Kammonen and the Helsinki Art and Design University MediaLab for the digitalization project.

As for the main roads and thus providing a basic order to the "randomness" of the city, we're also following the reconstruction from the austrian ethnologist Hanns J.Prem.

The game takes place on winter 1519/spring 1520, once Motecuhzoma has been kidnapped. He is held in the Axayacatl palace and used like a puppet by the spanish conquistadors and their tlaxcalteca allies. The Greater Temple has been desecrated with figures of Christ and the Virgin Mary. However, this takes place before Hernán Cortés leaves Tenochtitlán leaving Pedro de Alvarado in command, which would massacre the mexica population in a religious festival and finally flee in the "Noche Triste".


First post! The website for Dawn of the Mexica is finished in both its deskop and mobile versions and now online.

Its been a really busy summer, but now this site along with Twitter and a new Discord will become the sources from which updates for Dawn of the Mexica emerge.

The videogame itself is in its late stages of development. It began in November 2017 with the idea of creating a roguelike engine with a really complex tabletop RPG style set of rules, yet trying not to overload the player with them. Most things that contribute to Dawn of the Mexica's complexity are transparent to the user, whether it is the internal combat system which takes into account different weapons and armors -and more than a thousand critical hit variations-, the sound and smell subsystems, or the complexities behind several posion types.

After more than a year of non-stop development, once the engine was alpha-stable and properly working, the final idea for a game took shape at the end of 2018. A deep documentation work was therefore done in order to recreate the world of the mexica people in the early XVI Century. Legends and myths become real, but also their daily way of life, the kind of technologies, clothing and weapons they used, and so on. Sometimes you may also find that we're using nahuatl language terms for a few items or NPCs the player may find.

Currently the engine is 95% finished (the biggest issue pending is optimization, specially on the gas expansion algorithms) and development is mostly focused on content: Procedural level generation, NPC/monster design, character classes and overall game balance. It is a very challenging game for the player, it is very easy to die and death is permanent, but our aim is that it is also fair.

If it's written in the stars, Dawn of the Mexica will be available in early 2020.

Tweets by Dawn of the Mexica